Endless love: FAEMA for cycling Temporary exhibition 15 May – 30 June 2022 On Sunday 15 May, the temporary exhibition celebrating the partnership between the Gruppo Cimbali brand and the Giro d’Italia will open to the public at MUMAC.

To celebrate International Museum Day, promoted by ICOM, on Sunday 15 May MUMAC, Gruppo Cimbali’s Coffee Machine Museum, will open the “Amore senza fine: FAEMA per il ciclismo" (Endless love: FAEMA for cycling) exhibition. This temporary exhibition will certainly rekindle – in the hearts of enthusiasts and visitors – the long-standing love that began in the early 1950s and peaked in the late 1960s, which can now be rediscovered in the exhibition space in Binasco. 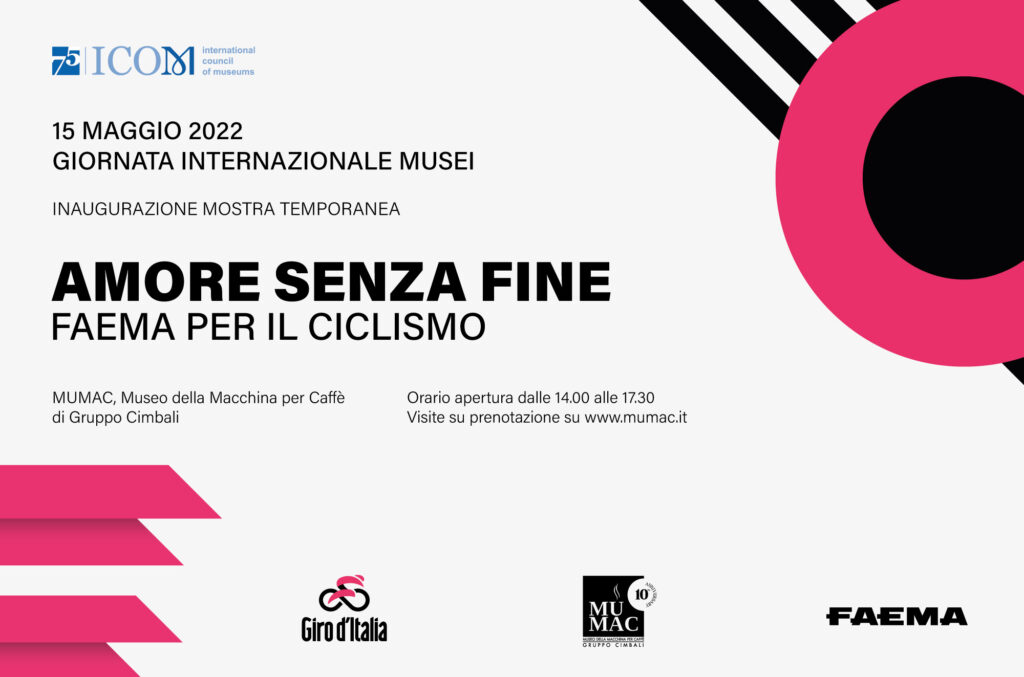 There will be a selection of historical documents, materials and priceless objects on display to tell the story of the almost 70-year association between the Giro d’Italia and Gruppo Cimbali’s iconic FAEMA brand. The exhibition will also include unpublished vintage photographs and historical bicycles, including one belonging to Eddy Merckx, kindly donated by the Madonna del Ghisallo Cycling Museum, with which MUMAC is renewing its historic partnership for this occasion. There will also be an accurate replica of the first Pink Jersey in history won by Learco Guerra, on loan from his grandsons Learco and Carlo, and exhibited alongside the 2022 Pink Jersey: past legend meets present history. Indeed, this year the Giro d’Italia sees the return of Gruppo Cimbali’s brand as a star at the competition: for three years, starting from this edition, the brand will become an official partner of the very popular cycling competition, which takes place in the most beautiful country in the world, reflecting Faema’s newfound, endless love for cycling. Guided in the early days by sports director Learco Guerra (from 1955 to 1960), this ‘human locomotive’ won the first Giro d’Italia in 1934 and succeeded in capturing the Pink Jersey for Faema in 1956 with Charly Gaul’s victory, continuing its success in the second golden age starting in late 1967, when Olympic champion Marino Vigna became sports director of the Faema team captained by Eddie Merckx. From 1968 to 1970 the Faema team won everything there was to win with champions such as Merckx, Vittorio Adorni, Italo Zilioli, Guido Reybrouck and Tony Bailetti, along with 40 other great cyclists. The special guests for the inauguration will be Olympic Champion Marino Vigna, who will comment live on the finish of the challenging and important ninth stage on Blockhaus, in the Maiella massif, at an altitude of 1,665 meters, and Antonio Molteni, President of the Fondazione Museo del Ciclismo Madonna del Ghisallo. “Amore senza fine: FAEMA per il ciclismo” will open on Sunday 15 May from 2 pm to 5:30 pm. There will also be guided tours of the permanent exhibition with Enrico Maltoni. Admission by reservation only. The exhibition will then be open to the public until 30 June, by appointment, on Tuesdays and Thursdays during the museum’s opening hours, and again on Sunday 12 June at MUMAC, which this year celebrates its tenth anniversary since opening, hosting the largest permanent exhibition entirely dedicated to the history, world and culture of professional espresso machines. This unique place tells the story of more than 100 years of history, technology and design of an entire Made in Italy sector. It is a space for spreading the culture of espresso machines and the quality of Italian espresso throughout the world.

We would like to thank the Museo del Ciclismo Madonna del Ghisallo (1970 Faema bicycle
for Eddie Merckx and 1968 Pink Jersey), Herbie Sykes (archival photos), Carlo and Learco
Guerra (reproduction of the 1st Pink Jersey from 1934 and photos from the Guerra Family
archives) for their loans.