The exhibition is moving from the Deutsches Museum in Munich from 8 October 2020 to 6 June 2021.

The exhibition is moving from the Deutsches Museum in Munich from 8 October 2020 to 6 June 2021
After attracting many visitors to the Deutsches Museum in Munich (390,000 in total), MUMAC is still one of the stars of the Cosmos Coffee exhibition scheduled to be held at the State Museum of Natural History in Karlsruhe (SNMK) (www.kulturinkarlsruhe.de) from 8 October 2020 to 6 June 2021.

Cosmos Coffee is the exhibition dedicated to the coffee world, exploring cultivation, processing, transport, preparation and consumption. Six coffee machines from MUMAC form part of the show, which has become a travelling exhibition to offer a comprehensive vision and experience of the “coffee universe”. The exhibition focuses on six themes (biology, chemistry, technology, economics, culture and ecology), offering an immersive and interactive journey to discover the drink from a sensory and scientific perspective.

For this important event, MUMAC has lent six pieces from its collections:

The MUMAC loan is a continuation of the “loan project” initiated by the museum with the goal of spreading coffee industry culture and sharing its heritage with the most important associations and institutions around the world.

In addition to the important loan to the Deutsches Museum in Munich, where the Cosmos Coffee exhibition began (4 July 2019 - 10 July 2020), the most recent museums to which MUMAC has lent its pieces include the Musée des Arts Decoratifs in the Louvre in Paris, for the retrospective devoted to Gio Ponti (19 October - 5 May 2019), and the Milan Triennale, for the large solo exhibition dedicated to Achille Castiglioni (6 October 2018 - 20 January 2019).

Below is the complete list of the works on loan. 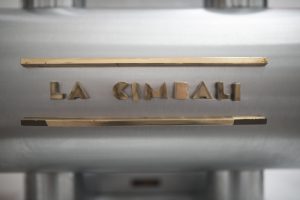 The history of the La Cimbali brand began in 1912 when founder Giuseppe Cimbali opened the first shop in the centre of Milan, dedicating himself to the production of essential components for coffee machines. In 1930, he began to produce his own professional espresso machines at the workshop in Via Lecchi in Milan and he launched the Ala model, one of the first horizontal machines, in various versions (with one, two or three groups) with an electric and gas-heated boiler. 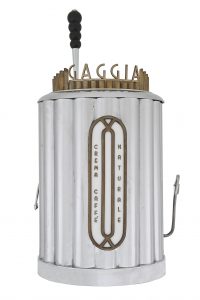 In 1947, Achille Gaggia filed an innovative patent involving the introduction of the piston: the insertion of a lever that could pump pressurised water onto the coffee powder. The innovation meant that the powder only came into contact with hot water at high pressure (around 9/10 atmosphere), enabling extraction of the aromas that add fullness to the taste and the components necessary for producing the typical espresso cream. 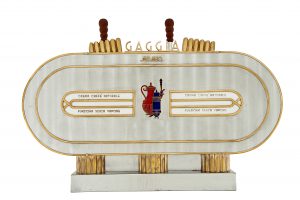 The very first examples of this machine are influenced, to a certain extent, by the American preference for a streamlined design: the “Export” machine (made with 2, 3 and 4 groups) is an innovative model in terms of its design, functionality and rational volumes. Ironically nicknamed the “sardine box”, its curious shape was designed to house the cups on the sides of the structure, while the backlit plexiglass body displays the words “Crema caffè naturale funziona senza vapore”. 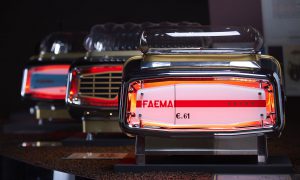 This famous and revolutionary coffee machine, whose name, E61, refers to the solar eclipse in 1961, was the final outcome of several patents and the result of the evolution of previous models. The water for the coffee no longer came from the boiler as in the past, but directly from the water network, passing through the resin softener that eliminated limestone; the volumetric pump pushed it, pressurized to 9 bar, through a heat exchanger placed inside the steam boiler, which heated it, bringing the water up to the optimal temperature. After undergoing these processes, the water entered the brew group and, thanks to the infusion which allowed the entire ground coffee panel to be soaked, enabled maximum extraction of the espresso coffee’s aromatic substances in 25 seconds. 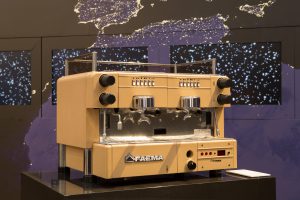 Ettore Sottsass and Aldo Cibic, two well-known masters of Italian design, together designed a professional machine that embraced the technological innovations of the time.

The Tronic was the first machine to incorporate electronic components: users can choose the quantity of coffee that they want to produce through a push-button panel, while the machine ensures correct dosage, guaranteeing a higher quality drink. 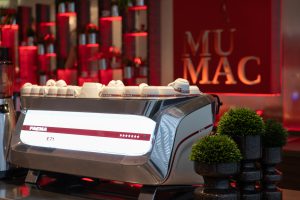 Faema E71 is the best interpreter of gourmet coffee in which technology and tradition have found new forms, merging in a machine designed to achieve perfection with every cup of coffee. Equipped with an innovative hydraulic circuit with a GTi infusion control system that guarantees perfect control of the coffee infusion and dispensing times, the machine features numerous ergonomic solutions that are attentive to the needs of every barista and coffee specialist.