Tuesday, 7 December 2021 MUMAC is delighted to open its doors for Teatro alla Scala in Milan’s Prima Diffusa, live streaming the opening opera of the 2021/2022 La Scala season: Giuseppe Verdi’s Macbeth, conducted by Riccardo Chailly and directed by Davide Livermore. The Prima Diffusa circuit organised by the City of Milan and Edison brings opera to the general public for the tenth year.

Audiences can attend the event by prior booking. Doors open from 4.45 p.m. and the opera starts at 6 p.m., after an introduction by Professor Marco Targa. Places are limited. Read more about the event programme in the poster at the end of this article.

Gruppo Cimbali’s support for the opera house and its museum began in 2016, when it sponsored the exhibition ‘Madama Butterfly, l’Oriente ritrovato. Foujita e Asari per Puccini’ at the Scala Theatre Museum. It has continued to support the opera house ever since and is currently supporting the exhibition ‘Giorgio Strehler alla Scala’, inaugurated on 5 November.

This important partnership between one of the symbols of Made in Italy excellence in the world of coffee and one of the most prestigious ambassadors of Italian culture in the world, is an opportunity for Gruppo Cimbali and MUMAC to show their support for the culture sector, which has been one of industries most affected by the health emergency.

The Prima Diffusa will take place in the museum’s temporary exhibition space and the live streaming will follow the same schedule as La Scala’s showing through a RAI COM channel live connection.

Attendance at the event is by reservation only on the MUMAC website at the following link. Places are limited and the event is free of charge. A Green Pass is required for entry. 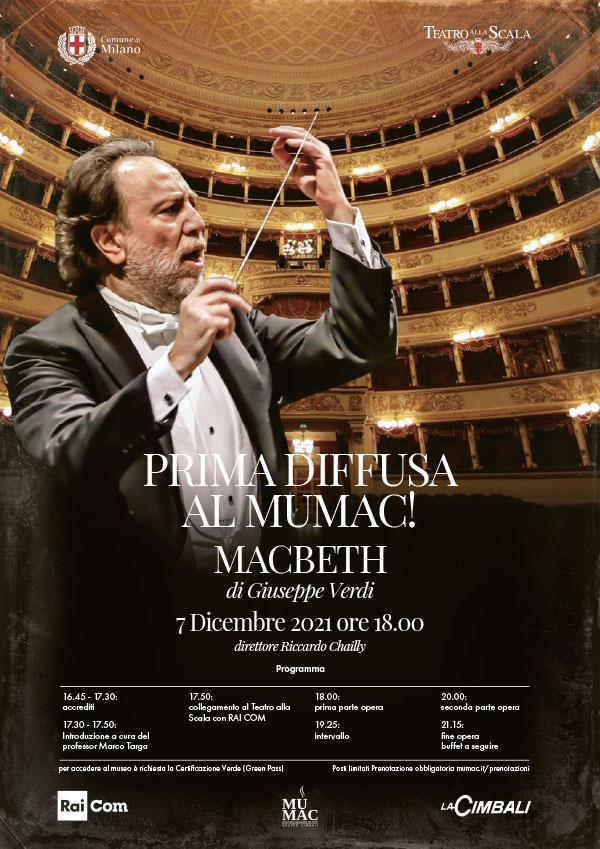