A focus on the future and industrialisation, the birth of the automobile and the first coffee machines in the quintessential Art Nouveau Style

“As soon as I have got flying to perfection, I have got a scheme about a steam engine” 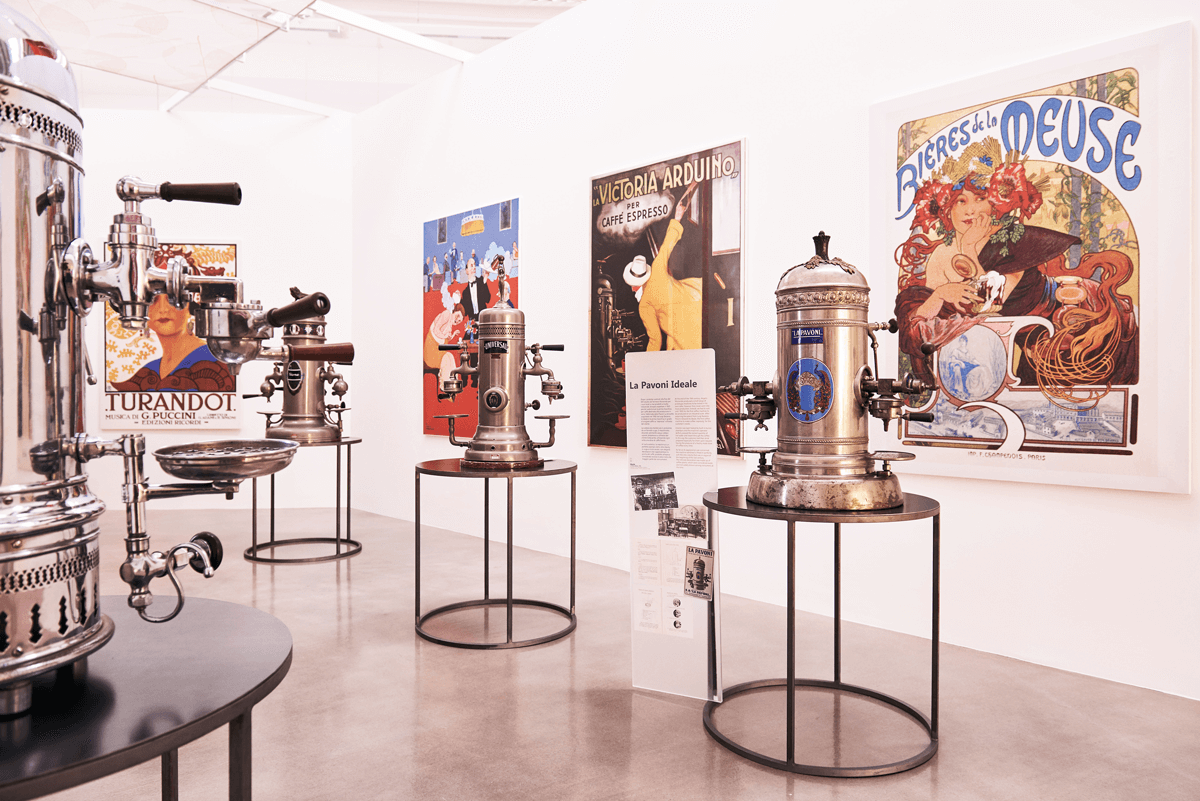 In Italy, in 1884, the “Gazzetta Piemontese” (which would later become “La Stampa” in Turin) announced the launch of a “beautiful machine for making coffee”. This was Angelo Moriondo’s invention which, although still farremoved from the first espresso machines, had the advantage of offering the growing number of coffee lovers a high-quality drink that was not yet prepared ‘cup by cup’ (i.e. made specifically for the customer who requested it), but rather ‘instantly’ and in large quantities in the special container with which the machine was equipped.

Two of these machines, patented but never marketed, are on display in the Moriondo family’s Gran Caffè Ligure for the public service of instant coffee, as he termed it, rather than espresso. Milan resident Luigi Bezzera was responsible for inventing the brewing group (very similar to the one still used today due to the presence of the filter holder with one or more spouts and a system for attaching it to the central body of the machine) which marked the birth of espresso coffee, made expressly on the spot and rapidly at the customer’s request. The invention, applied to Pavoni machines, was exhibited for the first time at the 1906 Milan Trade Fair, and from this point on the sector boomed. 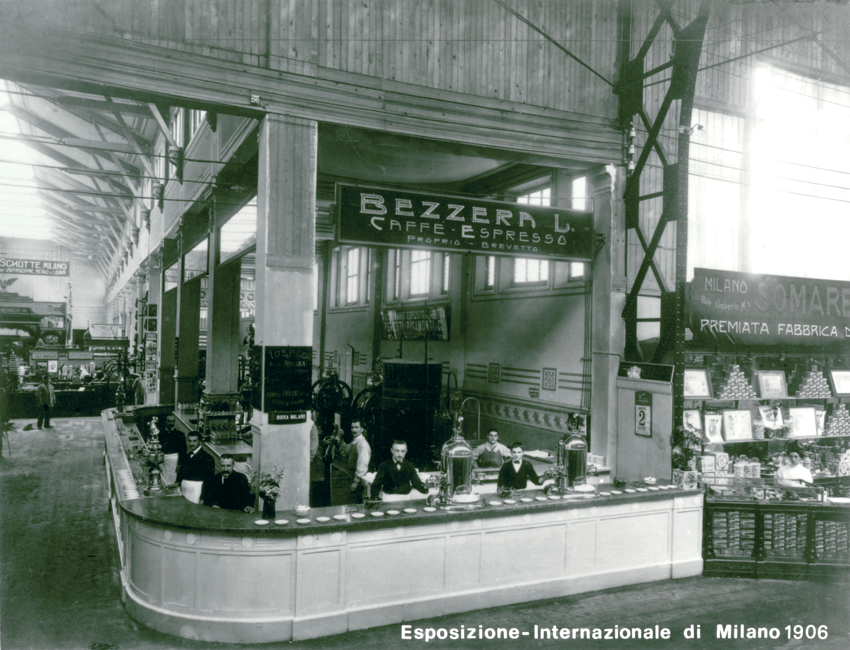 Young Giuseppe Cimbali was already assisting La Pavoni with manufacturing the machines that would be exhibited at the fair and began his apprenticeship in a sector that would see him play a leading role in the following years. Machines from this period were operated by licensed machinists to keep steam and pressure under control and prevent them from exploding. Delivering a dark, hot and creamless coffee, very different from espresso as we know it today, they also aesthetically reflected the style of an era, from then on inextricably linking style and industrial design in a harmonious language. For example, liberty style or art nouveau, with its curved, sinuous contours, enamels and exotic plant motifs inspired by the little-known coffee plant, characterised machines from the early days right up to the rationalist period. From here on, and for decades to come, the machines were the key attraction on the luxurious counters of the cafés and American bars of the time, reflecting the style of each historical period and representing a product of Italian ingenuity that would soon transcend national borders.
The machines became widespread and with them the word espresso soon became synonymous with tasty and strong Italian coffee: Bezzera, La Pavoni, Eterna, Victoria Arduino, Condor and La San Marco were just some of the brands that quickly established themselves, while in 1912 Giuseppe Cimbali, recognising the growing industrial investment in the sector, decided to open his own small workshop to supply coffee machine manufacturers with boilers. 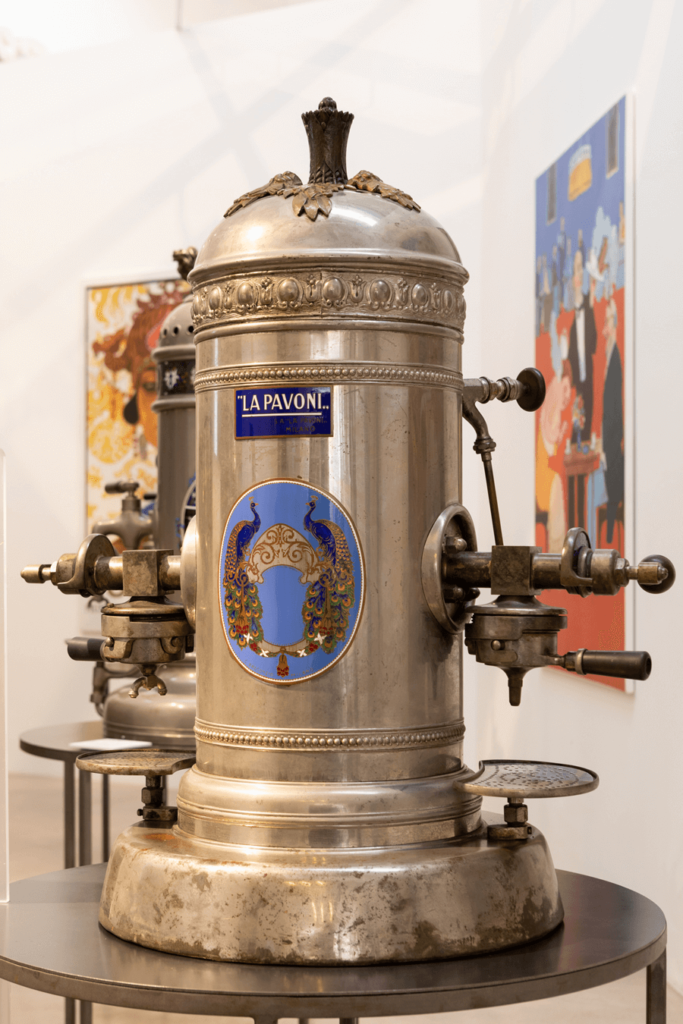 What about the raw material?

Beans continued to arrive from their countries of origin in the ports of Venice, Genoa, Trieste and Naples, while the first roasting plants developed. Starting in the late 19th century, they began to organise themselves into companies that were destined to become international, such as Vergnano (1882) and Lavazza (1895). Thanks to these companies, Piedmont became the cradle of the Italian roasting industry, which subsequently developed around other ports such as Trieste (Hausbrandt in 1892 and Illy later in 1933). Today, there are around 800 hundred micro to large companies in Italy that transform raw coffee into roasted coffee, making our country a global exporter of roasted coffee.