The Interwar Period and the Rationalism

"Woe betide the machine that confesses to the strain of its labours."

Following the First World War and the Wall Street Crash of 1929, Western countries suffered severe problems in every aspect of economic, productive and social life, with severe consequences. The US financial crisis witnessed a drastic worldwide reduction in all the economic indicators that measure the state of prosperity and progress of a country’s economy: production, employment, income, wages, consumption, investment and savings. Every country independently sought to contain the crisis and rampant unemployment through economic protectionism and interference in the stock markets and central banks, often through state ownership of industries.
To safeguard domestic production, customs tariffs on imported products were raised and the first autarkic production cycles, exclusively using local raw materials, were launched. It was a difficult, complex period of forced immobility that led Italy too to sink into a regime involving state intervention plans, colonial wars and autarky.  In this context, all Italian industry, with the exception of the war industry, suffered a setback. However, the coffee machine world, in its own niche composed of the few consumers who could afford this luxury, continued to evolve, driven by an interesting paradox. While national consumption was declining, consumption peaks were recorded in the major urban areas, fuelled by a high concentration of wealthy customers unwilling to forego a real espresso. Thus, public establishments grew and became meeting places and cultural hubs. The coffee machine sector certainly suffered a setback in terms of technological innovation (they were still steam-powered), but people continued to congregate around the ritual of a cup of espresso prepared at the counter and served at the table. 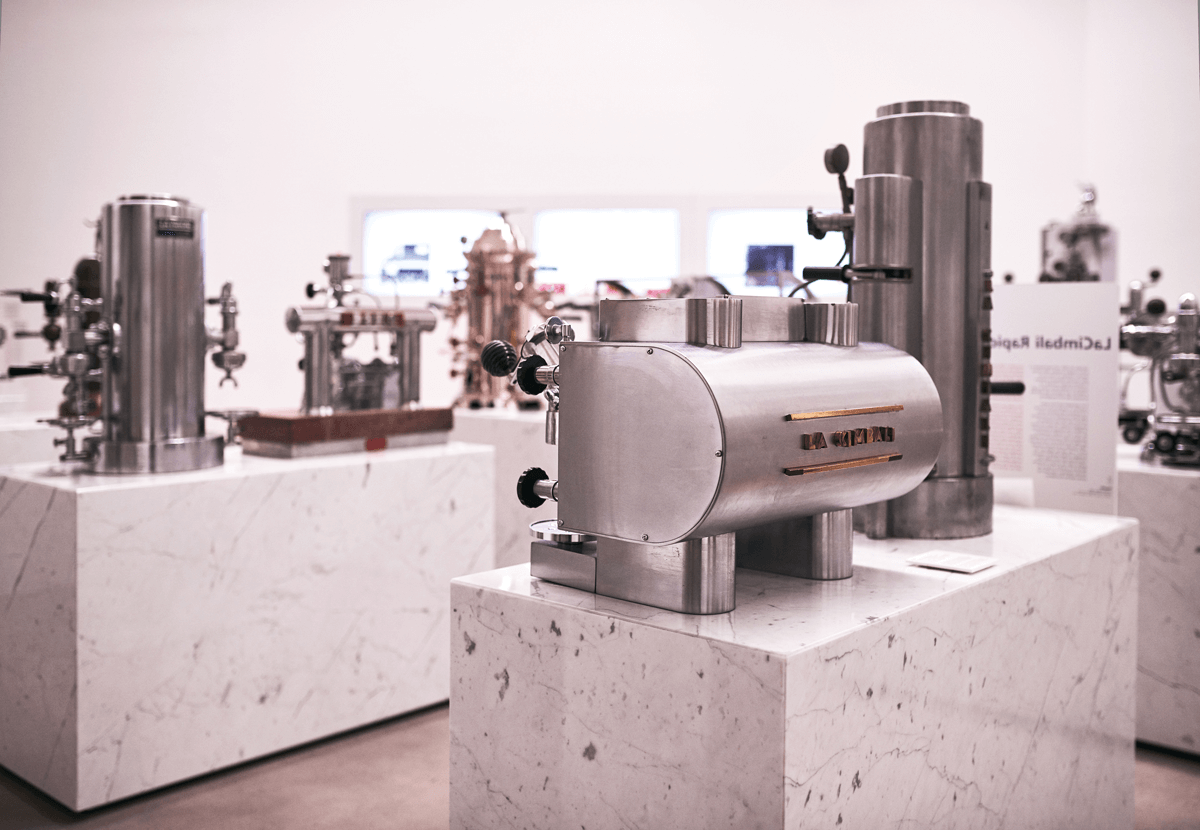 During this troubled period, Italian design and architecture started to gain admirers around the world: the simple and functional austerity of the rationalist movement, featuring minimal geometric lines, was also applied to coffee machines with stylistic simplicity, favouring plain, unadorned designs. Any decoration or concession to ‘beauty’ was considered superfluous. Coffee machines, like any other work tool, were considered beautiful because they fulfilled a useful function, while decoration was a legacy to be consigned to the past. The brands also reflected the spirit of the time and were represented according to prevailing trends. During this period, Giuseppe Cimbali introduced his first coffee machine to the market, La Cimbali Rapida, which had a vertical design consistent with other models of the time. 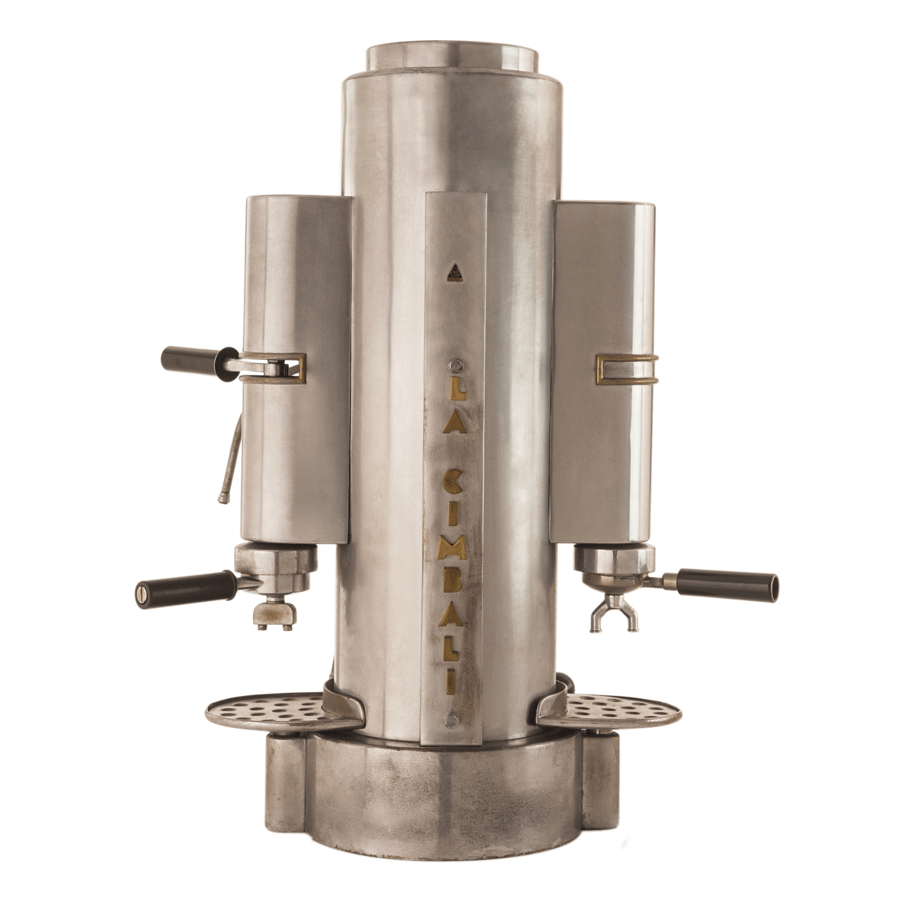 In the early 1940s, although the technology remained the same, something began to change in the designs: machines began to switch from vertical to horizontal and performance improved: with the brewing groups all positioned on the same side, a single operator could handle the dispensing of several coffees from the same ‘convenient’ position, thereby becoming faster and more efficient. Another accessory was introduced that was previously impossible to find in vertical machines, which were often fitted with domes: the cup warmer, demonstrating the increasing attention paid to all stages of espresso preparation. The space, which was usually located above or to the side of the horizontally positioned boiler, worked by exploiting its heat: from then on, espresso had be served in a warm cup.
The autarkic period of raw material quotas also led to the production of hybrid machines to compensate for the difficulty of accessing energy sources, resulting in cars that could run on gas, electricity and even coal.
This was the period when the wealthier classes indulged in drinking ‘real’ coffee (an increasingly rare commodity) in coffee houses, while the lower classes had to make do with substitutes or surrogates for the much more valuable raw material, with ‘espresso’ based on chicory, barley, rye, acorns and figs. Anyone who could afford to, paid a higher price to avoid foregoing a pleasure that was increasingly becoming a daily ritual.
Following the outbreak of the Second World War, many industries were converted to production for the war effort, while others continued to operate thanks to female workers who replaced fathers, sons and husbands who had left for the front. Much of Italy’s inventiveness inevitably ground to a halt and better solutions were shelved until brighter times. One of these went on to revolutionise the coffee machine, but it was not implemented until almost a decade later. Namely the invention of lever extraction and the emergence of cream coffee. The first development in this regard came in 1936, when Cremonese widow Rosetta Scorza filed a patent entitled “Plunger tap for espresso coffee machine”. Achille Gaggia, a littleknown Milanese barista, acquired the invention, experimenting with it in his Bar Achille, and later developed his own patent, exhibiting the coffee cream brew group (advertised as the “Lampo system, the only coffee compressor that works without steam”) for the first time at the 1939 Milan Trade Fair;  however, everything was interrupted due to the war. 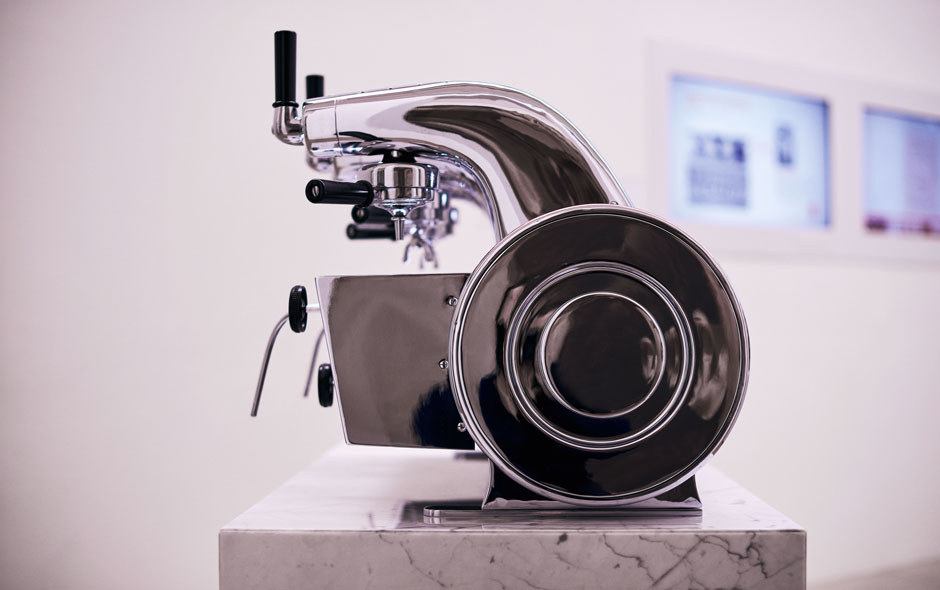 Even leading names in architecture started to understand the importance of this sector and to give it the attention it deserved. The forerunner was Gio Ponti, who in 1947 designed a machine for La Pavoni that to this day is still considered the most beautiful in the world: the D.P. 47, dubbed La Cornuta (The Horned) due to the horn shape of its brew groups. Today, only two of these machines remain in the world (only one of which, MUMAC’s model, is always on public display). However, despite its unrivalled beauty, La Cornuta was launched as a steam model at a time of transition to a new extraction method that quickly supplanted the others: the lever.