The Postwar years and the invention of the lever

Recovery began in the early 1950s, leading to a thirst for innovation. The lever technology revolution gets underway and the café is born

"Give me a lever long enough and I shall move the world."

On 11 May 1946, the Teatro alla Scala reopened with “the reconstruction concert” conducted by the acclaimed Arturo Toscanini, who had just returned from the United States where he had self-exiled during Fascism. Milan’s invitation to bounce back anticipated a period of innovation-driven economic and social recovery. Bars became places for gathering and sharing, no longer intended for an elite, but as ideal meeting places for everyone, consecrating coffee at the bar as a social ritual that transcended class distinctions. Riding the wave of affluence and lightheartedness that swept through Italy after the dark years of the war, bars became increasingly crowded and lively places. People also met to watch television, a unifying tool of social change that was still rare in Italian homes. Or they used their coffee break to flick through newspapers, to discuss sport and politics, to spend time with friends and to relish the concept of ‘free time’, which was completely unknown to most people just a few years earlier. 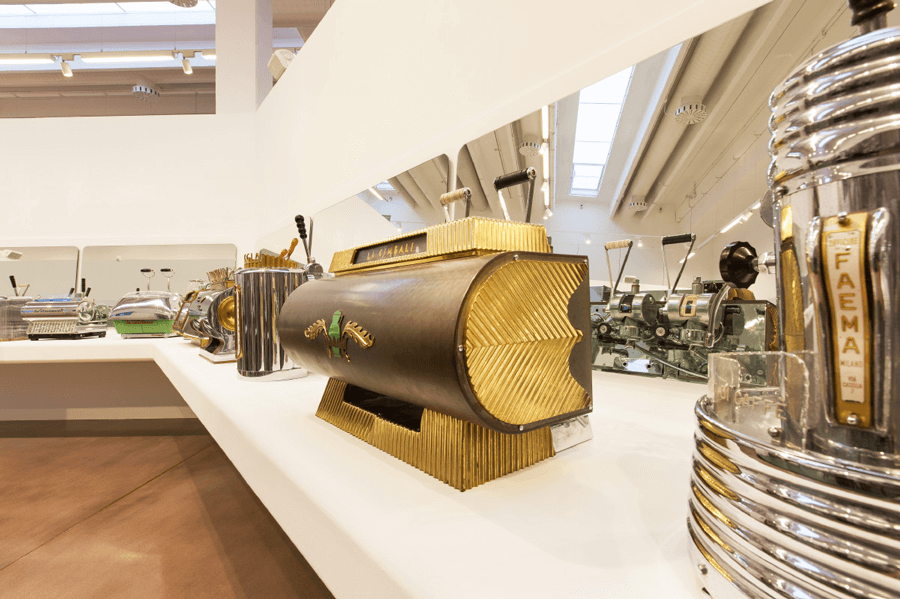 The desire to experiment that characterised this historical period – which was very creative and one of the most interesting in our history – also prompted coffee machine manufacturers to turn to architects and designers to develop new products in line with changing needs. The machines’ design was by no means immune to the appeal of the aesthetic model from overseas: the new products were influenced by the American style with its sinuous contours, chrome plating and sparkling lights. The shapes echoed the designs of the trendiest cars and jukeboxes, the standout features of bars and clubs of the time. Even leading names in architecture started to understand the importance of this sector and to give it the attention it deserved. 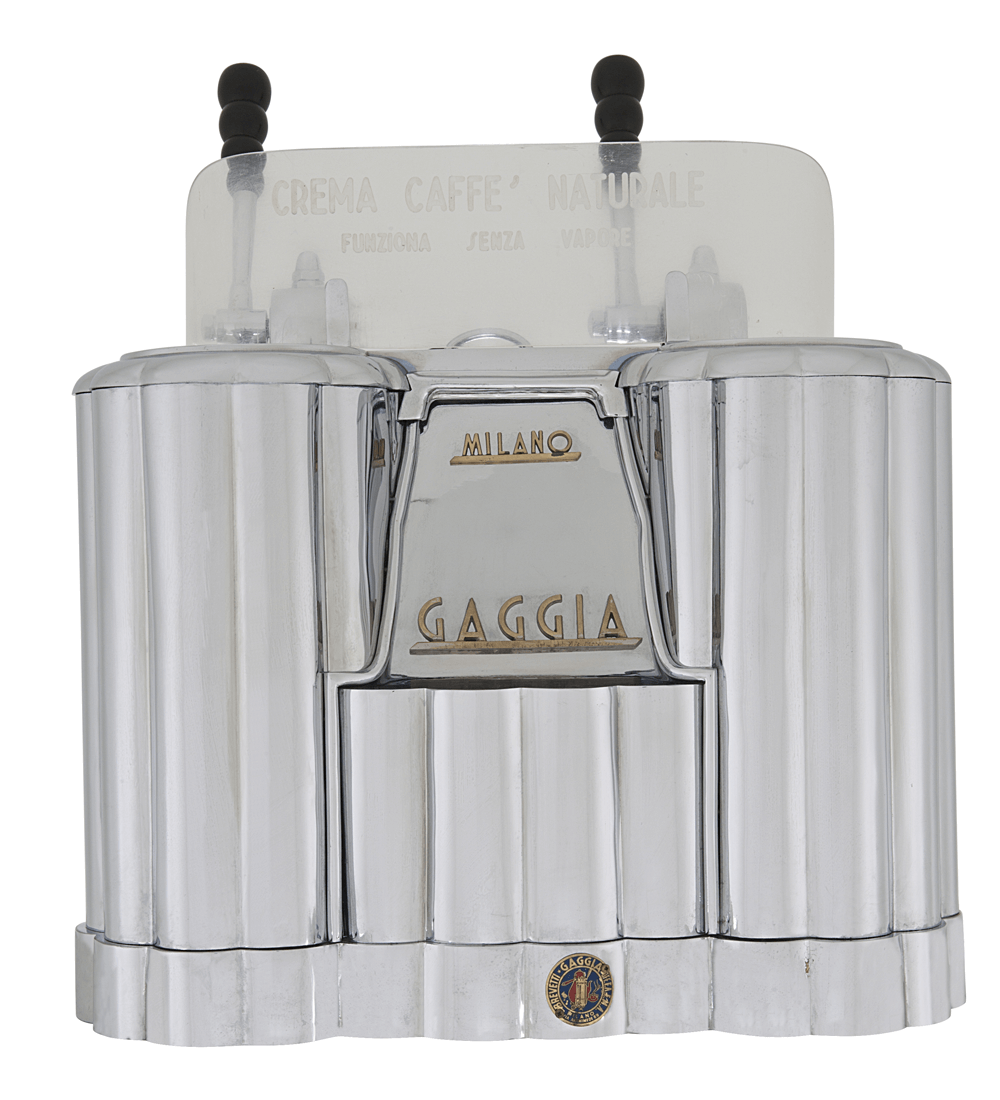 The true revolution in espresso machines was the invention of the lever, an idea initially conceived in 1936 that had been abandoned in 1939 due to the war. In 1948 it was finally brought into production by Achille Gaggia, with the launch of the Classica Gaggia model. For production of the Classica, Gaggia turned to the FAEMA workshops of Carlo Ernesto Valente, who had opened his Fabbrica Apparecchiature Elettro Meccaniche e Affini a few years earlier. The machine, equipped with two boilers, delivered water at a temperature below 100 degrees without generating steam. The result was extraordinary: the drink was now dispensed in just over thirty seconds, all the burnt notes caused by the use of steam disappeared and, for the first time, coffee cream was produced, the perfect crowning glory of an espresso, which from then on became inseparable from the concept of coffee consumed at the bar. While for today’s coffee consumer cream and espresso are a single concept, at the time this was a significant innovation, so much so that outside the premises where Achille Gaggia’s machines were in operation a sign read “Natural cream coffee works without steam” as an invitation for customers to try it.
The race to develop new machines suitable for extracting espresso coffee cream led first FAEMA with its Saturno and then La Cimbali with its Gioiello to extract, using a lever and without steam, coffee’s essential oils which, with their aromas, created a fuller flavour and, with their emulsion, produced the typical espresso cream. This technology elevated espresso to cult status and transformed the figure of the ‘machinist’, the person who formerly operated the coffee machine thanks to his stoker’s licence, into a ‘counter operator’, i.e. an expert user of the lever machine, which was now positioned on the counter in front of the customer. 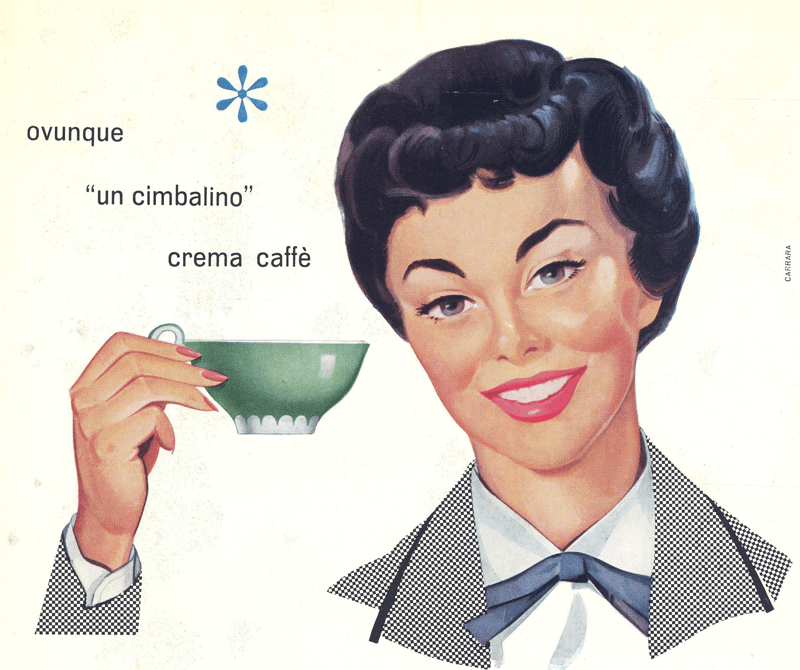 Espresso took on new names depending on the brand of the machine that produced it: natural coffee cream for Gaggia and hydro-compressed coffee infusion on the FAEMA Saturno (the first lever-operated machine produced by Valente after the split from Gaggia), but one stands out in particular: Cimbalino, the term coined with the launch of Cimbali’s first lever machine, the Gioiello (‘Jewel’), presented inside a casing just like a jewel at the 1950 Milan Fair. This simple, effective expression used to refer to Italian espresso with cream was primarily popularized through advertising, created for the La Cimbali Gioiello professional espresso machine, which invited people to try a “a Cimbalino with La Cimbali”, a slogan that was later featured on the front panels of the machines produced from then on (including the Rubino and the Granluce), putting it in the public eye: We must remember that at the time machines stood on the main coffee shop counter, rather than on the back counter. The word was propagated by radio advertising, in newspapers, by company motor vehicles that stopped in squares to distribute free coffee, by promotional activities linked to sport, and by large-scale distribution on coffee shop counters of machines bearing this invitation. It spread to such an extent that by the 1950s the expression Cimbalino came to be associated with Italian espresso coffee everywhere. From north to south, Italian espresso transformed into the Cimbalino: “Whole coffee cream: an aromatic, stimulating, creamy, hot coffee, in other words the perfect coffee,” as an advertisement described it at the time. The idea for the name was devised by the creative second generation of Cimbali brothers: a “Cimbalino” became synonymous with good Italian coffee and with how people asked for espresso at a coffee shop – a warm, intense, rich, creamy coffee with a fine-textured shade and striped effect that conceals the black liquid beneath. The term remains unchanged to this day in certain countries around the world.
New inventions accompanied the strong economic recovery: while just a few years earlier the Vespa and Lambretta were the only affordable vehicles, by the mid-1950s the number of cars circulating in the country had risen to over a million, prompting newspapers to report traffic problems for the first time. Car production quintupled along with coffee machines, which in the days of the Ideale were produced in small numbers (one a day) and by the end of the 1950s had reached the considerable figure of fifty a day, spreading from North to South, in Italy and throughout the world. 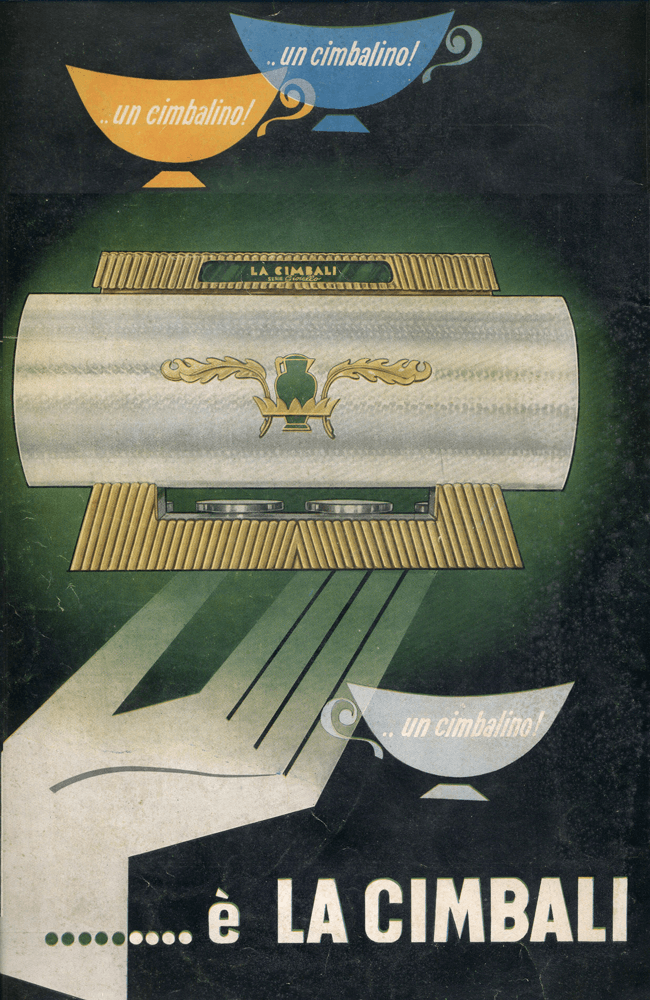