The museum is closed untill next 31 August.
See you in September!

“the five senses are like bridges along which mankind engages with the world, this is why in our language, we refer to them in a figurative way:

This expression denotes an ability to distinguish the good from the bad, the beautiful from the ugly. Someone is said to “have good taste” when they recognise the quality of what is being experienced, be it a cooked dish, a painting, a novel, a landscape, or an object!

Therefore, someone with good taste loves food, but also the surrounding context, how it is presented and the instruments used for its consumption.

During their long professional life, the Castiglioni brothers showed an interest in all three aspects, they were prolific designers and in particular they built a multitude of objects (plates, glasses, cutlery…) for the serving of food: 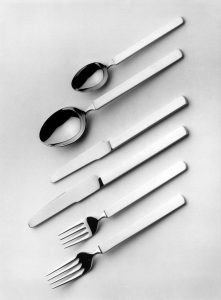 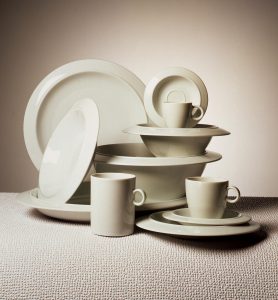 They were also interested in the places where food was served (their own home, alehouses, restaurants…). They developed a fascination for the way in which these objects and places were used, for how this ritual develops in multiple places and with multiple objects, used to facilitate interaction with other human beings. 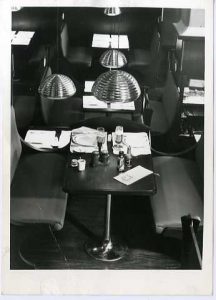 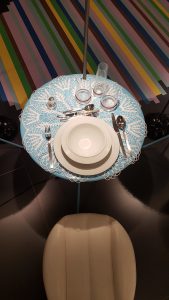 Their “tastefulness” enabled the Castiglioni brothers to find innovative solutions for use on such convivial occasions.

The Castiglioni brother embraced this challenge and created new objects for eating with, new locations for the consumption of food and for enabling the interaction of people while doing so.

Achille recollects how there was always a special regard for food and his childhood memories take him back to the table where: “tablecloths were always white linen, écru at most, and napkins were very large, the plates were double porcelain, white every day even if there were guests. Each diner always had their own personal salt shaker. The evening soup was always served from a large and heavy tureen, poured into small white soup bowls.

Lunch was always seen as a moment of aggregation, in fact for a number of years the family would gather around the grandparents’ table, an occasion for meeting up after a week of intense work and study.

For a number of years the grandparents’ apartment was above the studio of Achille and Pier Giacomo, enabling a fluid transition between work and family interaction. Their grandparents’ table became a place for trying out new objects.

Achille developed his very own, specific attention to coffee.

This means that coffee and the café, the place where the beverage is served, represents the meeting with one’s own thoughts, with friends, interaction between thought and action.

For both our father Achille and Irma our mother, daily rhythm was organised around the drinking of a few, in some cases quite a few, cups of coffee. This makes it seem as though coffee was a beverage to be drunk by the litre for the Castiglioni family. However, as previously mentioned, coffee is more than just a drink; above all it is a “ritual”, consumed at the bar counter or at home.

Therefore coffee is a moment of respite, a break, a way of reorganising your ideas, engaging in dialogue with co-workers, enabling you to carry on with renewed determination. This is why in his projects, Achille developed his very own conception of the “coffee break”.

In the Bavero service project, particular attention was paid to the espresso coffee cup and the context of its use. 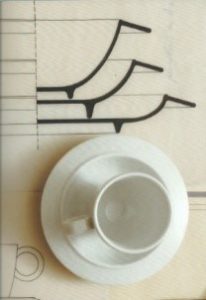 The cup, with a ring-shaped handle, is embraced by the saucer so that it isn’t toppled by abrupt movements. The sauce features a reclined edge for enhanced grip.

Often coffee is sipped hurriedly while standing at the bar counter, after meals, during work breaks, however in many cases it is also a moment of tenderness between two people.

This is why in the project for the Tea for Two service, Achille created a tray for two cups, for two people only.

Many believe that coffee should be savoured without sugar in order to truly appreciate its flavour.

At our home, adding sugar to coffee was and is an unbreakable habit, almost a ritual, Achille would never drink it any other way, he would rather go without.

The need to add sugar led Achille Castiglioni to pay particular attention to the coffee spoon in the Dry service.

Dry cutlery is characterised by a rectangular handle, redolent of a carpenter’s pencil, to facilitate grip.

In contrast, the coffee spoon features a different design, with a square-section handle, enabling it to flow between the fingers as they stir, dissolving sugar in the cup.

In order to find out more about the Castiglioni brothers’ interest in coffee, we must go back in time to 1962, the year in which Achille and Pier Giacomo designed an innovative espresso coffee machine, the ‘Pitagora’, for Cimbali. With the “Pitagora” the Castiglioni brothers focused on ritual, the ritual of sipping coffee at the bar, entirely overhauling the image and language of the coffee machine, inserted in the context of the bar counter. Until then, coffee machines had been “monuments” which characterised the counter even more than the bar furnishings. With “Pitagora” and its geometric lines, the bar, coffee, espresso technology and ultimately the ritual itself, took over.

At last we can drink this coffee together!

In this short account our aim was to describe how our father designed bars and objects which were functional, embraced and conferred pleasure upon moments dedicated to food and drink.

How all this was conceived to ensure the food and drink ritual would be consumed in the best possible way,

bringing everyone together, as an integral part of our culture and our way of life.

Giovanna Castiglioni was born in Milan in 1972.

She set aside her geology degree to manage the multitude of projects present in her father Achille’s studio.

Since 2005 she is the curator of Studio Museo Achille Castiglioni and in 2012 she was appointed Deputy President and General Secretary of Fondazione Achille Castiglioni. Previously a sessional professor at the Milan Polytechnic University, Polytechnic School of Design and IED, she was curator of the exhibition-show “A casa Castiglioni”, also staged at MUMAC and, in collaboration with ADI, of a “runway show” of Golden Compass Castilgioni objects. She holds conferences for the Foundation both in Italy and abroad, with an interactive approach involving the audience. In 2018 she was involved in organising the exhibition “A Castiglioni” for the Milan Triennale, curated and set up by Patricia Urquiola in collaboration with Federica Sala.

Carlo Castiglioni, Achille’s son, was born in 1949.
After graduating in Medicine and Surgery, his career initially developed in the field of clinical research and then as a manager of healthcare service organisations, with particular focus on telemedicine and home care.
Following his father’s passing in 2002, he started to work with his sister Giovanna, to keep the studio-museum open, organise the filing of documents and promote the vast creative activity developed in a period of work spanning sixty years, and to continue or resume the production of objects created by Achille. In 2012 he was one of the founding members of Fondazione Achille Castilioni and is President of the Foundation, active in its day-to-day running.