From tiny stores to cultural organisations, cafés have always been an integral part of Italian history. Check out this map of the historic cafés still serving coffee to this day

“They have in Turkey a drink called coffee, as black as soot, and of a strong scent, which they take, beaten into powder, in water, as hot as they can drink it: and they take it, and sit at it in their coffee-houses, which are like our taverns.” Thus wrote Francis Bacon in his work Sylva Sylvarum, published posthumously in 1627. This is one of the first documented testimonies of the communal establishments where a large part of the cultural, political and indeed art history of the Old Continent developed. “No Café, no literature!” was how Hungarian writer Sandor Marai put it three centuries later. Indeed, many cafés were not just every-day places – they were forums of history, of human life, of culture and of politics.  Coffee lover Honoré de Balzac defined them as “an institution” in the late 1800s, referring mainly to the ancient Caffè Pedrocchi in Padua, which was also known as the café “without doors” on account of the fact that it remained open day and night from its opening in 1831 to 1916. “The café is an institution that defies definition. (…) it is a lawyer’s office, a stock exchange, a theatre, a club, a reading room,” he wrote. 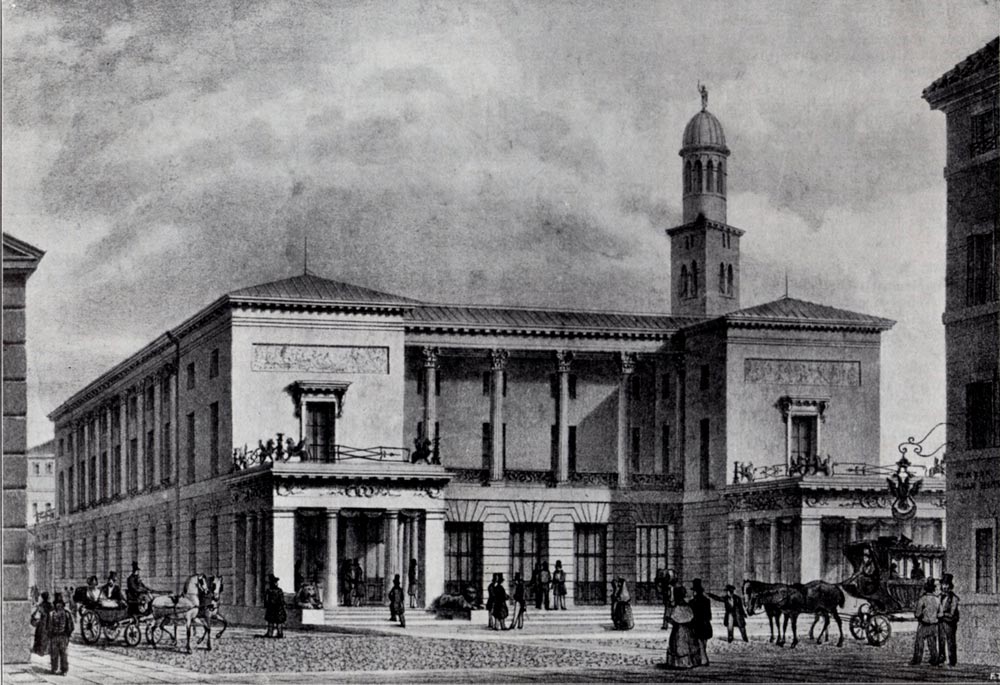 External of Caffè Pedrocchi in Padua towards the square. (From a print of the time when  the popular meeting place was opened to the public | Photo MUMAC Archive)

Venice was the first city in Italy to open public spaces where people could enjoy this hot, black drink. They were known as “botteghe del caffè” and quickly became very popular. The oldest is the elegant Florian, which is thought to have inspired Goldoni to write his opera by the same name. Opened in 1720, the café looks out onto one of the most beautiful piazzas in all of Italy: St. Mark’s Square. Another famous Venetian café is Caffè Lavena. Synonymous with luxury and music, it is where Wagner composed pages of Parsifal. Its tables have also been frequented by Foscolo, Verdi, D’Annunzio, Rubinstein and Rostropovich. 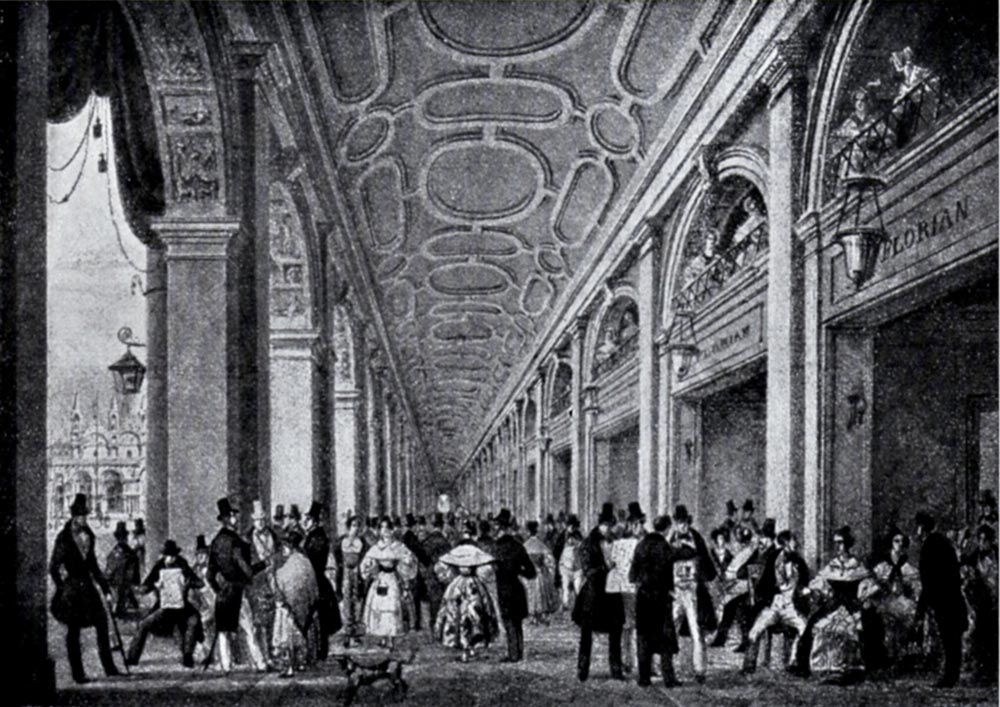 The Florian in Venice in the first half of the 800s. (From a print of the time, at Correr museum | Photo MUMAC Archive)

Politics and culture in a coffee cup

In aristocratic Italy, coffee represented a precious gift that could be offered as a symbol of friendship or love. It was thus that coffee spread from north to south. Caffè Centrale in Asolo was founded as a “Società del Casino”, a cultural circle popular in French cafés of the era. It is said that two of its members plotted against Napoleon in 1808. In 1839, it obtained its “political licence” as a café and has been an integral part of the city’s history ever since. There is a similar story behind Vicenza’s Caffè La Meneghina. A letter dating back to the Austrian period states that in 1948, “the Meneghina, a place of nationalism, was kept under watch by the agents”, but the owner protected the secret meetings – led by Garibaldi – in the name of freedom.

Another temple of Italian culture is Caffè Roma in Borgo Valsugana, where the Trento division of the Lega Nazionale was formed. This irredentist association engaged in anti-Austria activities, posing as an organisation working to protect the Italian language and culture.

In Aosta, one can sip a super espresso  in an architectural gem named Caffè Nazionale, which features stunning antique furniture in its Gothic-style circular main room, the last remaining piece of the Convent of San Francesco. The walls are decorated with coats of arms.

Turin’s historic cafés include Caffè San Carlo, where the likes of D’Azeglio, Cavour, Lamarmora, Rattazzi and Giolitti visited during the Risorgimento. It was here that Crispi convinced the left-wing party to intervene in Africa and organised the Expedition of the Thousand, convincing Garibaldi to lead it. Not far away, the 18th-century Il Bicerin served up coffee, hot chocolate, milk and syrup, its fame quickly growing. It was well loved by the likes of the patriot Silvio Pellico, the composer Giacomo Puccini, the philosopher Nietzsche, Italy’s first prime minister Cavour, the poet Gozzano and the writers Calvino and Soldati.  Providing another taste of times gone by in Turin is Fiorio, which was frequented by the most influential conservatives of the time, for whom liberty was a civil conquest to be achieved slowly, while sipping on coffee and eating ice cream, of which the owners still guard the secret recipe. Three different eras are combined in the elegant Caffè Platti. The pastry room is fitted with sophisticated Louis XVI-style interiors, while the coffee hall features a 1920s bar and the stucco ceiling and other room have clear Art Deco and Rationalist influences, dating back to the 1930s. 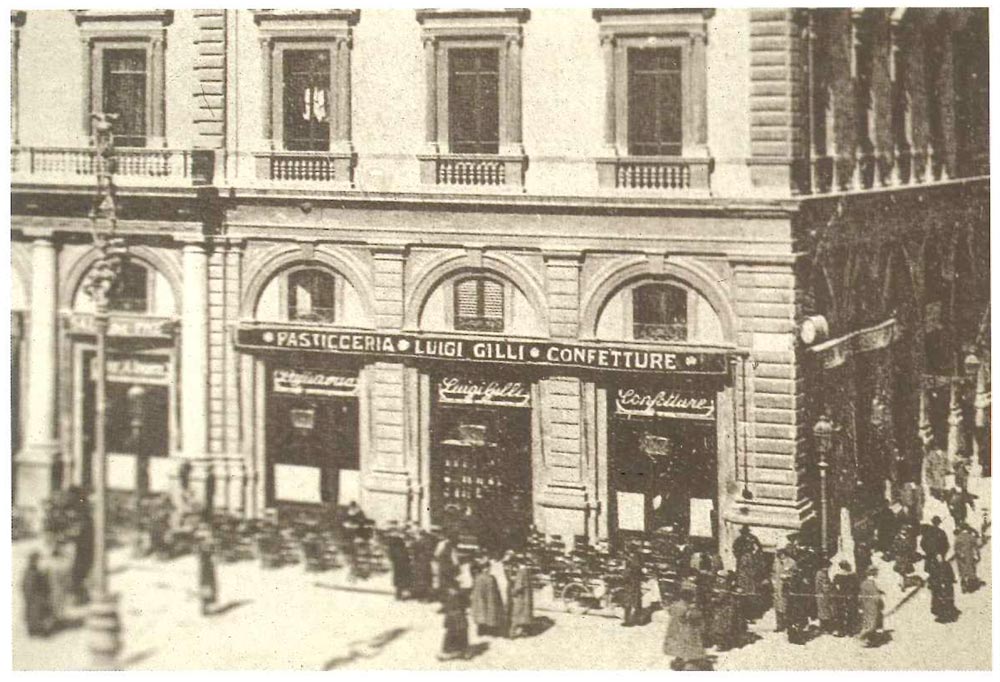 From secret meetings to café concerts

A Milan institution, Cova was one of the supporters of the rebels of the Five Days of Milan uprising against Austria in 1848 and, in 1868, even minted coins. Meanwhile, the more recent Cucchi café sparked the “café concerts” phenomenon in Milan in 1936. Open until two in the morning, the café hosted performances by international artists, and its tables were a hotbed of poetic talent, attracting poets of the calibre of Ungaretti.

The jewel in Oneglia’s crown is undoubtedly Pasticceria Piccardo. Also known as the “Gentleman’s Café”, you could only go in if you had a university degree. It was one of the first places to have a radio and public telephone. It is said that Mussolini once received a slap from its female owner after making a cheeky remark. Legend also has it that Fausto Coppi, leading the Milan-Sanremo race by 14 minutes in 1946, popped in for a coffee before getting back on his bike and going on to win the race. Italian president Sandro Pertini, the writer Italo Calvino and the composer Luciano Berio are also said to have been regular customers.

Since 1805, Caffè dei Costanti has been at the head of the Arezzo café scene, the reserve of academics and noblemen. Caffè del Tasso in Bergamo, meanwhile, was a simple inn named the “Inn of the Two Swords” during the Risorgimento. It took the name of the poet in 1681.

Founded in 1733 as a “sweet breads store”, Caffé Gilli in Florence became the elegant meeting place of “ordained” intellectuals. It was here that Carducci took coffee and Prezzolini met with his editors at La Voce, under frescoed ceilings and in front of the majestic counter.

In Pisa, Caffè dell’Ussero is a monument to Italian culture, situated in the 15th-century Palazzo Agostini on the banks of the Arno. The following illustrious figures were among its customers: Domenico Guerrazzi, Giuseppe Giusti (who immortalised it in his “Memorie di Pisa” of 1841), Renato Fucini, Mazzini and Giosuè Carducci, who wrote a mock-heroic poem here.

Opened under the name “Gran Caffè” in 1860, Gambrinus in Naples was renovated in the neo-classical, classical and Art Deco styles by Antonio Curri in 1890. To this day, it features ornaments and stunning paintings by the leading artists of 19th-century Naples.

“Who knows how many tales and sonnets Meletti has inspired within me,” wrote the poet Trilussa of Caffè Meletti in Ascoli Piceno, another rare example of the Art Deco style. For years, it was a place where ideas were formed and the headquarters of the “Senate”.

Liszt, Bizet, Wagner, Goethe, Casanova and Stendhal loved to frequent the Antico Caffè Greco in central Rome. Since its opening in 1760, it has been a uniquely popular café in the Italian capital. Another café to enjoy undeniable success is the more recent Caffè Sant’Eustachio, situated near to Piazza Navona and the Pantheon. Built in 1938, it features a wood-burning coffee roaster and spacious, white interiors. It is renowned around the world not only on account of its blends, prepared with water from an ancient aqueduct, but also for its speciality Gran Caffè, an espresso so creamy that you can almost stand a teaspoon up in it. Nobody knows the trick behind this. If you ask how they manage to make it taste so good, the barman simply replies: “I just push the button.”

Think of all the water and pressure used in these cafés, where coffee is still served and the desire to share ideas, dreams and suggestions lives on, accompanied by the aroma of a darn good espresso. 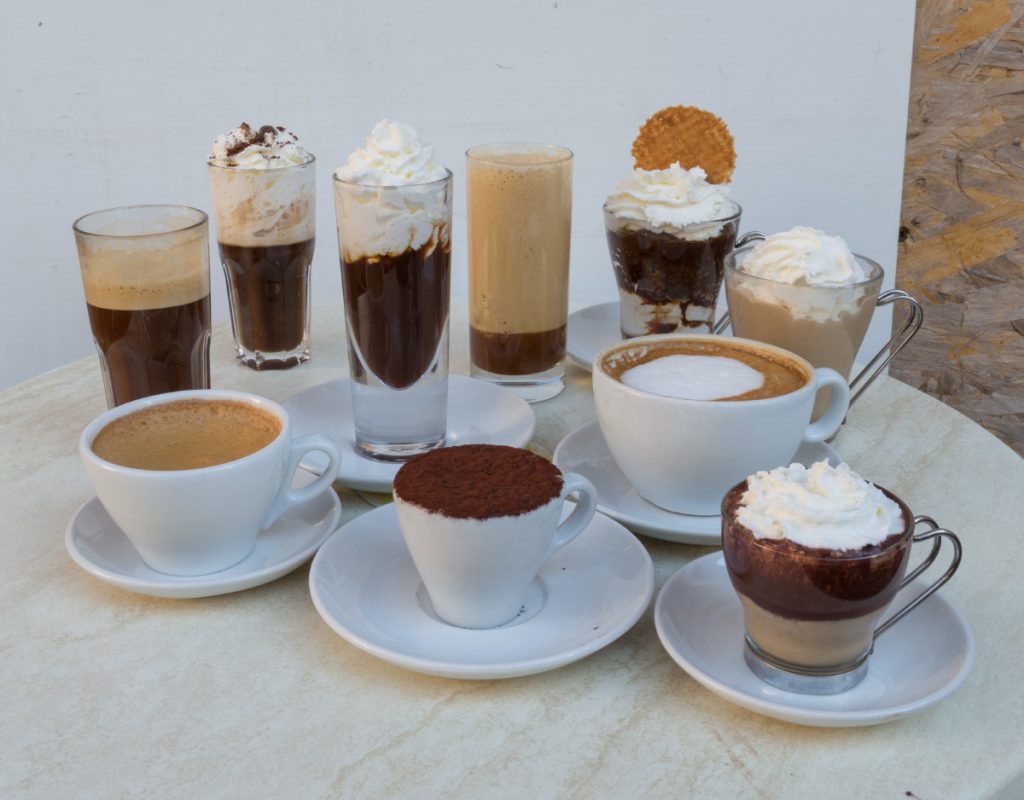