You don’t need to be a language expert to know that coffee and bicycle don’t rhyme. Anyone could tell you that – be they a four-year-old child, perhaps an expert in nursey rhymes, or a Polish cyclist who knows nothing whatsoever of the Italian language. Having said that, in reality, the connections and affinity between the most popular beverage in Italy (behind water) and the most popular means of transport – for short journeys – are self-evident.

The history of racing

Let us give you the historical background to this strange couple. The history of cycling is closely linked to coffee and the coffee machine industry: from the heroic feats of the period after World War Two, where the competitors’ hearts, muscles and capacities for suffering were ready to push themselves to the very limits of human survival, to the ultra-hi-tech world of modern cycling, where every tiny detail is accounted for – from nutrition to wind tunnel training.
The pages of the newspapers and magazines of the 1950s, ‘60s and ‘70s are full of yellow-tinged photos of logos and brands that helped write the professional cycling history books. 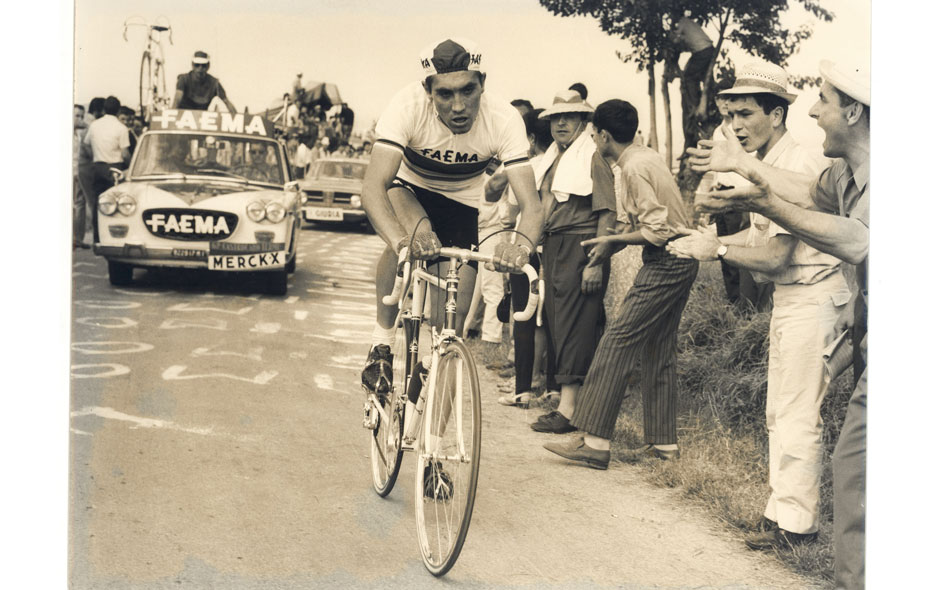 The great victories of Eddy Merckx

The Faema Brand Faema, for example, has a particular bond with the legend and achievements of the man revered as – probably – the greatest cyclist of all time: the Belgian Eddy Merckx. While other cyclists have been successful (though never quite like Merckx), it was the Belgian’s incredible, inexorable sporting desire that made him a legend. A quick all-rounder who was strong on both climbs and descents and all but unbeatable in the spirt, Merckx clocked up a stunning series of victories in his Faema-branded jersey. He claimed two Giro d’Italia and two Tour de France titles, while the Faema team recorded 18 stage wins in the Italian race and 20 at the Tour (the Belgian personally claimed 13 and 14 respectively). Merckx also won one Milan-Sanremo, one Tour of Flanders, one Paris-Roubaix and one Liège–Bastogne–Liège. Most incredible of all was the fact that he achieved all this in just three years with Faema.

The Cannibal in tears

Perhaps the most heart-rending image of the Belgian in the Faema jersey is from the 1969 Giro. It is one that few fans have forgotten: the great champion crying alone after having been disqualified from the race after failing a drugs test. The Cannibal, as he was known on account of his hunger for victory, protested his innocence but was disqualified from the race, despite his second sample coming back negative. Felice Gimondi went on to win the Giro, but refused to don the winner’s pink jersey as a show of solidarity with his colleague, rival and friend. 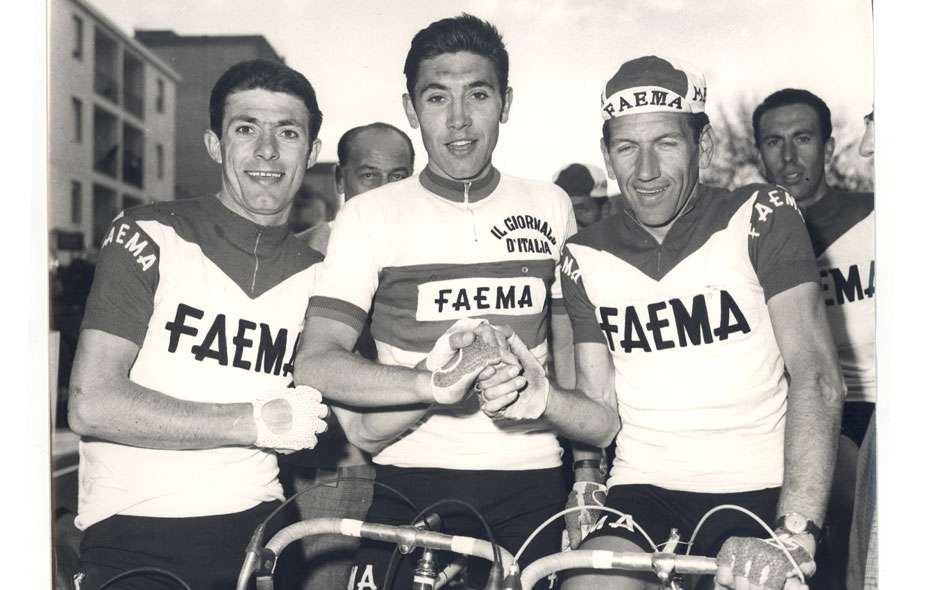 Faema wasn’t just about Eddy Merckx, of course. To all intents and purposes, it was an Italian team. Nobody could forget the extraordinary victory of legendary Italian cyclist Vittorio Adorni in the 1968 Road World Championships. Adorni was well known even before the victory: a professional since 1960, the rider from San Lazzaro Parmense had won the Giro d’Italia in 1965 and claimed the silver medal at the Road World Championships in Sallanches in 1964, losing out to Dutchman Janssen in the sprint finish. Adorni got his revenge at the same event in Imola in 1968: part of a six-man breakaway which included the Belgian Rik Van Looy, who was considered the favourite should it go to a sprint finish, Adorni shook off the other leaders 90 kilometres from the finish and reached the line with a lead of nine minutes and 50 seconds, one of the largest margins of victory ever registered in a world championships.

The influence of the Faema brand is evident from the exhibits at MUMAC, but the Madonna del Ghisallo cycling museum  in Magreglio, in the province of Como, is perhaps the greatest tribute to Faema. Opened in 2006 thanks to the efforts of former cyclist Fiorenzo Magni, the museum has over 700 exhibits and is recognised around the world as the ultimate archive of Italian cycling history.
MUMAC and Museo del Ghisallo have teamed up on a series of initiatives designed to showcase the collections of both institutions.

Not bothered about professional cycling, but a big fan of riding yourself? Don’t make the mistake of overlooking the relationship between coffee and cycling: caffeine holds great benefits for our bodies, increasing gastric secretion, which aids digestion and energises our cardiovascular system. But what’s that got to do with my bike, I hear you ask? A great deal, as it turns out. A study completed by a team of Australian researchers has proved that consuming caffeine before, during or after exertion increases the percentage of glycogen in the blood by 65%, just boosting the body’s capacity for recovery. Something to consider when contemplating a hill climb or at the end of your daily cycle.
Still not convinced? Well, try this one on for size: a study published in the Journal of Applied Physiology has debunked the much-repeated myth that the positive effects of caffeine are greatly reduced through daily use. Professor Bruno Gualano of Physiology and Nutrition at the University of Sao Paulo analysed the performance of 40 cyclists for the purposes of the study, showing that regular consumption of coffee improves performance even in the long term. Of course, this doesn’t meant that coffee drinkers automatically go faster. Yet sensible consumption of two or three cups of your favourite beverage a day can help your performance.

The bar dedicated to Learco Guerra

There are many cafés and bars linked to the world of cycling both in Italy and abroad. And there’s no better example than this than the British brand Rapha, which has enjoyed phenomenal success. However, this time we’d like to focus on a bar that has recently opened in the popular Via Savona in Milan, the centre of the so-called “fashion district” in the Lombard capital. The bar is called Pink Jersey 1931 and was dreamt up and opened by Carlo Guerra, the grandson of the legendary Learco Guerra, who was nicknamed the Human Locomotive, together with Carlo’s brother – also named Learco – and son Attilio. Guerra won the first Giro d’Italia title of his long career on 10 May 1931, hence the name of the bar opened in his honour. It’s a great place to go for a coffee or aperitif, with plenty of photographs, vintage bicycles, newspaper cuttings and general memorabilia from the glorious past to admire. Visitors can also buy modern or vintage cycling jerseys – just like at MUMAC, where the store sells replica FAEMA jerseys made by legendary brand De Marchi, which produces technical and vintage cycling clothing.

So, you see there really is an unbreakable bond between cycling and coffee. Even if they don’t rhyme.