The museum is closed untill next 31 August. See you in September!

The opening or closing of the museum is always subject to the anti-covid current regulations.

The taste of coffee

Legend has it that the first beings to enjoy coffee were animals – goats, to be precise. It appears that one day, a 9th-century Ethiopian goatherd by the name Kaldi saw a group of his goats near a strange plant. Kaldi didn’t recognise the plant and, fearing it was venomous, shoed his goats away. A few days later, however, Kaldi took his goats to the same grazing spot – and again they showed an interest in the plant. By the time Kaldi realised, it was too late: the goats were already chewing through the beans and leaves. Kaldi was convinced that the goats would end up dead before long, but the next morning – to his amazement – he saw that the goats were not only alive, but seemed more active than usual, almost in a state of euphoria. Intrigued, Kaldi returned to the grazing spot, found the plant and popped one of the beans into his mouth, sucking on it for a while before chewing it. From these humble beginnings, the number of coffee lovers has grown to such an extent that it is now one of the most widely consumed beverages in the entire world.
We all know what coffee is and have all probably tried it at least once. But are we able to distinguish between different types and analyse their qualities and differences?

A range of roasting techniques are used to the sensory nuances within the bean. Therefore, in order to decide which technique you prefer, you need to try a range of different varieties of coffee.
The plants are grown in tropical and subtropical areas at high altitudes, where the climate is fresh and humid. The beans are actually the seeds of the plant, contained in edible berries: the green ones can be roasted at various temperatures in order to obtain the desired flavour. They are then ground, ready for use. There are three main types of roasting: light, medium and dark. The darker the colour of the coffee, the more bitter and less acidic the espresso becomes. So which do you prefer? Light or dark? 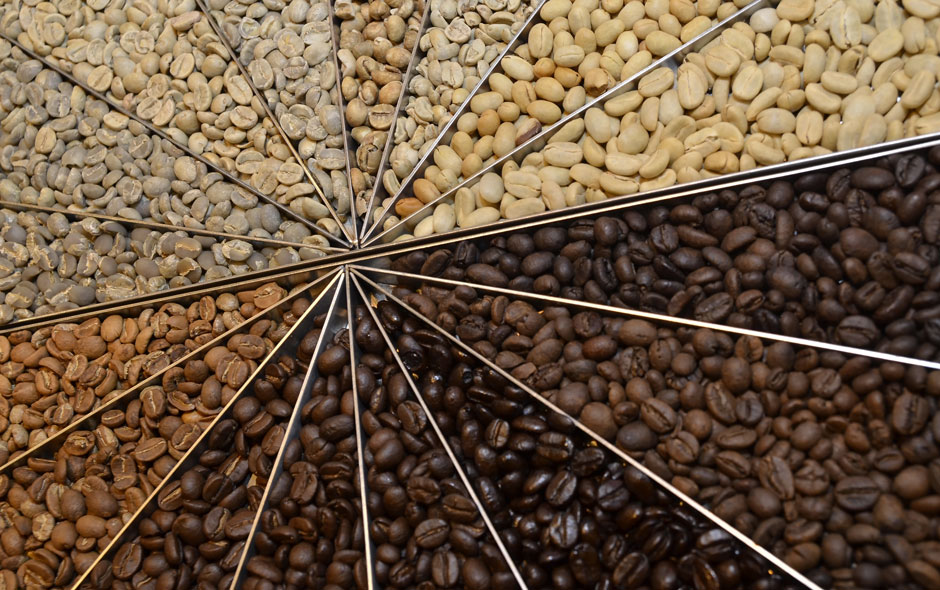 Coffee belongs to the Rubiaceae family, which encompasses a full 4500 varieties, 60 of which belong to the coffea genus. Of the 60 or so species of coffee plants in existence, only 25 are used for commercial purposes, two in particular: Arabica and Robusta. The majority of coffee blends are prepared with a combination of the two. Originally from Kenya, Ethiopia, Sudan and Yemen, Arabica is a self-pollinating plant which thrives at altitude. It has a lower caffeine content than other coffee plants, making for coffee with an aromatic, delicate flavour.
Robusta is the most widely cultivated variety in the world. The plant is indigenous to Guinea, Uganda and tropical Africa. It can be grown in a range of areas and is an open pollinating crop, meaning it can be pollinated with a range of species, creating any number of mixes. This makes it easier to grow. Robusta has a higher caffeine content. There is also the Liberica variety, which is the most common of the “other” species. A good quality variety, it is mainly found in Indonesia, Western Africa and the Philippines.

The art of the blend

Unique, intense coffees and consistent flavours can be obtained by mixing various types of coffee beans and roasting levels. This artform requires an extremely refined sense of smell and taste. The beans are mixed according to their properties and the individual qualities they exhibit during the roasting phase, such as chocolatey or floral aftertastes, intense notes and high acidity. Pellegrino Artusi, the writer, gastronome and literary critic, believes that like other foodstuffs, quality coffee is not just about individual products but the way they are blended, roasted separately and then ground together. According to Artusi, the perfect blend includes 250g of quality Puerto Rico, 100g of quality Santo Domingo and 150g of Mocha. Those that have tried this blend say it is the best around, both in terms of its balanced coffee aromas and its caffeine content.
There is one very unique type of coffee that is both one of the most expensive and has one of the most bizarre production methods in the world. Only a few hundred kilograms of Kopi Luwak, from Indonesia, are made every year. You may have heard of its nickname – poop coffee. If so, you get the idea. This unique coffee blend is made by feeding the coffee beans to a local animal known as the Luwak (or civet). Once digested and defecated, the beans are gathered by hand, roasted and sold.